Finishing the season inside the top 5 is always a challenge. The task becomes even more difficult if a player tries to stay there for more than a decade! Since the inception of the ATP rankings in 1973, only five players have achieved at least 11 year-end top 5 honours.

Jimmy Connors stopped at 14 before Ivan Lendl delivered a remarkable 11 seasons to join him on the list. We had to wait until the ‘Big 3’ to get more players on the roster. Roger Federer and Rafael Nadal have 16 top 5 seasons at the end of the year, with Novak Djokovic following them with 15.

Thus, Novak surpassed Connors and placed a season behind his biggest rivals. Djokovic ended the year ranked 5th after losing 2000 Wimbledon points, two Majors and four Masters 1000 events! The Serb lived through a ten-day saga in Australia in January and stole the headlines of the world’s media.

Novak returned from Melbourne and started the season in Dubai and Monte Carlo. The results were not there due to the lack of form and matches. Novak faltered in the Belgrade final against Andrey Rublev after losing steam in the decider before leveling himself up in May.

Djokovic lost a thriller to Carlos Alcaraz in Madrid after more than three and a half hours and captured his 38th Masters 1000 trophy in Rome. The Serb lost an epic Roland Garros quarter-final clash against Rafael Nadal in more than four hours, missing out on the crown and turning his attention to Wimbledon.

Novak claimed his seventh Wimbledon crown and 21st Major title following a win over Nick Kyrgios, lifting the trophy but losing 2,000 points to his tally. Thus, he was left out of the top-5 despite losing the chance to fight for the ATP throne.

Novak was unable to play Canada, Cincinnati and the US Open due to his vaccination status, missing out on more titles and points. Djokovic lost to Felix Auger-Aliassime in the Laver Cup before embracing an indoor winning streak. Novak’s third ATP title in 2022 came in Tel Aviv over Marin Cilic.

A week later, the Serb conquered the ATP 500 event in Astana after defeating Daniil Medvedev and Stefanos Tsitsipas to extend his streak. Novak was the favorite at the Paris Masters, looking for his seventh crown in the French capital.

Djokovic advanced to his 56th Masters 1000 final and faced young Holger Rune in a battle for the trophy. The Dane defeated the Serb 3-6, 6-3, 7-5 in over two and a half hours to secure his first Masters 1000 title and end Novak’s 13-win streak.

Djokovic missed chances in sets two and three and experienced a late break in the decider to finish second. Novak was a player to beat at the ATP Finals in Turin, seeking a record-equalling sixth title at the ATP premium event.

The Serb delivered five top-10 wins to conclude the season in style and lift his 91st ATP trophy, moving one behind Rafael Nadal. Djokovic should be the favorite at the upcoming Australian Open, seeking his 10th crown at Melbourne Park. 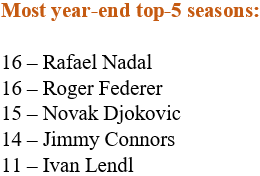